In today’s world, citizens use their smartphones for basically everything. Pre-schoolers rather know how to use their new iPhone than to tie their shoes. As technology has dramatically changed the way people interact with each other, it also bears the potential to make communication between citizens and authorities or governments much easier.

Nowadays, when residents call a public administration office, they are no doubt doing it from a smartphone. That is, if they’re not sending an email or using a mobile app.

Mobile apps are valuable for citizens and enable them to perform basic tasks such as receiving information, requesting a service, and reporting electrical failures or needed street repairs. This has several advantages: First, it makes the process of performing a task such as requesting a certain service much easier, as citizens can simply use the device which they are carrying with them in every minute of the day. Furthermore, it saves the citizens valuable time, which can also help the authorities to be seen more positively by citizens. Last, process automation and mobile applications for G2C («government to citizen») interactions simply saves the government money, which could better be allocated for infrastructure, social welfare systems or educational purposes.

The increasing role of e-government in promoting inclusive and participatory development has gone hand-in-hand with the growing demands for transparency and accountability in all regions of the world. – Sha Zukang, UN DESA Under-Secretary-General, United Nations E-government Survey 2012 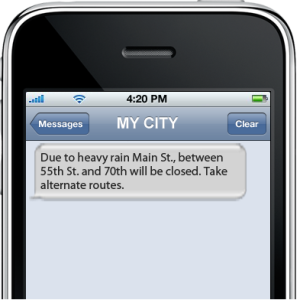 A public organization’s website is still their center stage for conveying information and services to citizens. Web-based reports and services are also the grounding of many social media campaigns.

According to the 2012 United Nations E-Government Survey, the concept of e-Government becomes more important in the implementation of authority process automation and citizen engagement. Is has reached different stages in different countries, as the survey states: «While most European Member States follow the approach of separate portals for their information, service and participation offerings, the Republic of Korea, the United States, Israel, Australia, Norway, Denmark, and New Zealand are among the few that come close to pure one-stop-shop portals with information, services and participation services integrated on a single site.»

In a world where everything and everyone goes mobile, governments as well as public agencies and authorities have to keep up with the latest developments – not only to meet citizen expectations, but also to take advantage of a more cost-efficient and time-saving way of processing G2C interactions.

PUSHTech™ enables governments and agencies with smartphone or tablet applications to engage their constituencies with personalized service messages and community alerts.

Citizens can now be kept updated and informed about all important government information via mobile communication. PUSHTech™ services enable governments and public agencies to meet the 21st century challenge of going mobile.